MERLIN Films develops and produces films with authors' own unique language. A cinema-kind trying to bring back a certain sense of poetry. Not caught up by the culture of spectacle, poetry is neither sweet thing, nice, nor dream or escape, and refuses to disguise life to forget its severity, but explores it in its complexity, to better reveal the unknown, an elsewhere in ourselves. To make our conscience autonomous, us free. To invite us to get back to ourselves rather than to distract us from ourselves.

In addition to the usual circuits, MERLIN Films also distributes by atypical channels these films to reach the general public.

We generally remember from Merlin the character widely spread. But he is also the one who is humbly to restore this link of harmony that humans have with the primordial forces. In the cinema, MERLIN therefore also exists in small confidential structure located in the mountains, managed by a filmmaker-Merlin the rider of the woods and most of the houses, for twenty years door-to-door like peddlers from yesteryear, to bring to the public another cinema and perspective. 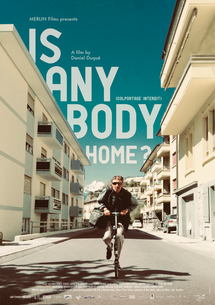 Is anybody home?
by Daniel Duqué