The Alma Pictures production company has been present at the Kazakhstan film market for more than 9 years. The key projects of Alma Pictures are Kazakshtan-made TV series that became popular in every family in the country.
Besides TV series, in 2017 the company released its first full-feature film, Boyzhetken. She’s ALL that. The film was very warmly and cordially received by the public. The filming of another film, a full-feature comedy The Diary of a Mad Woman, started in February 2018. 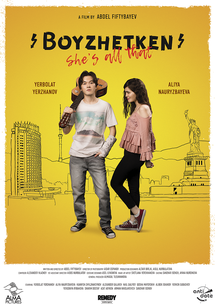