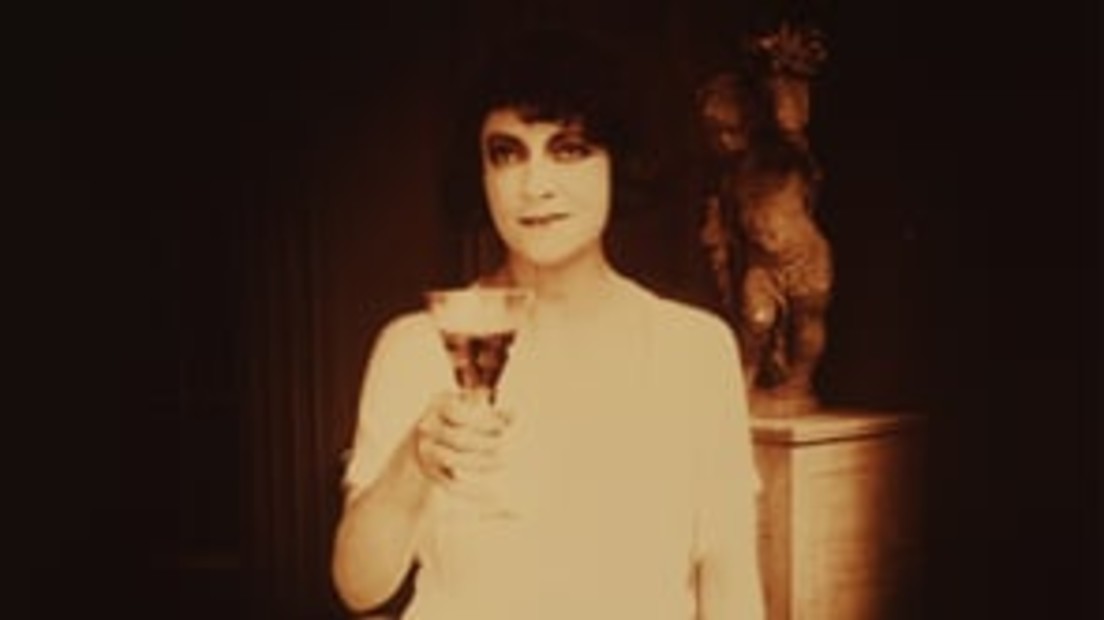 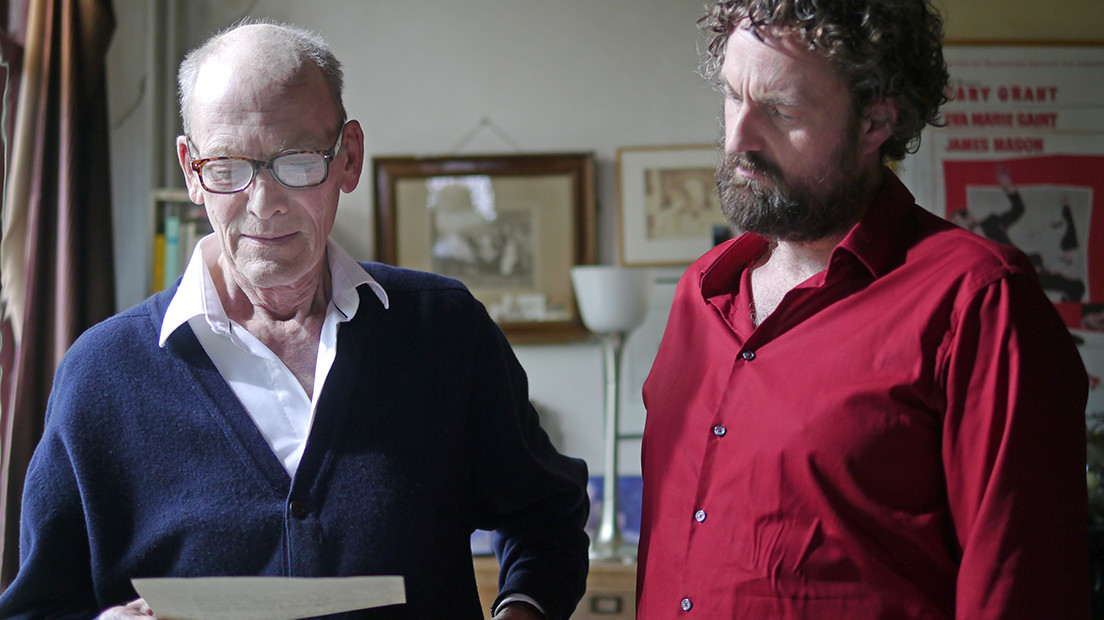 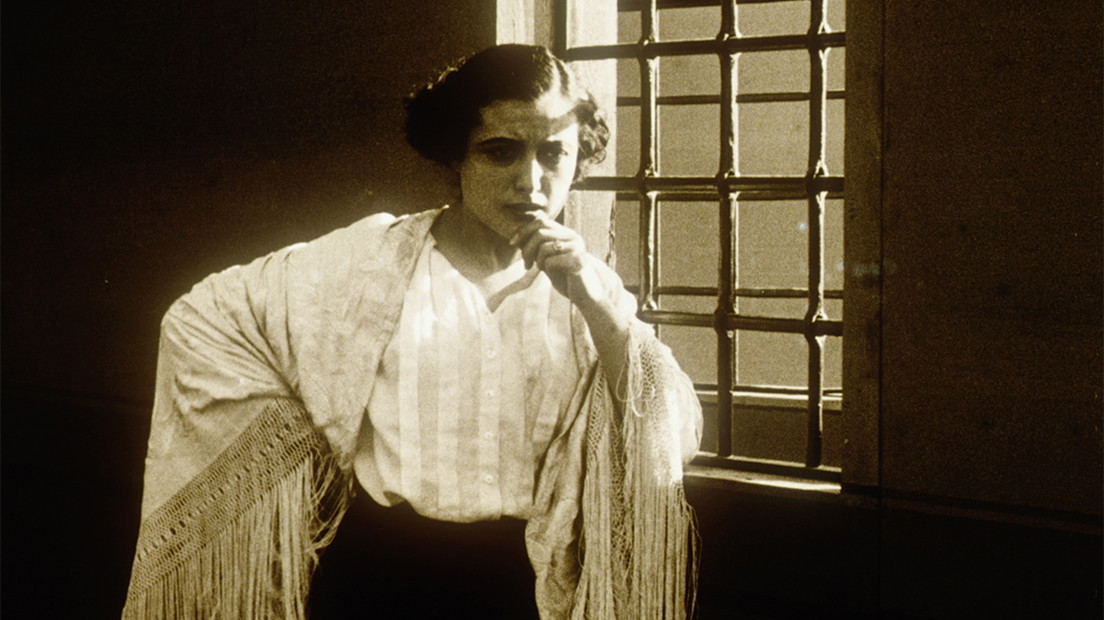 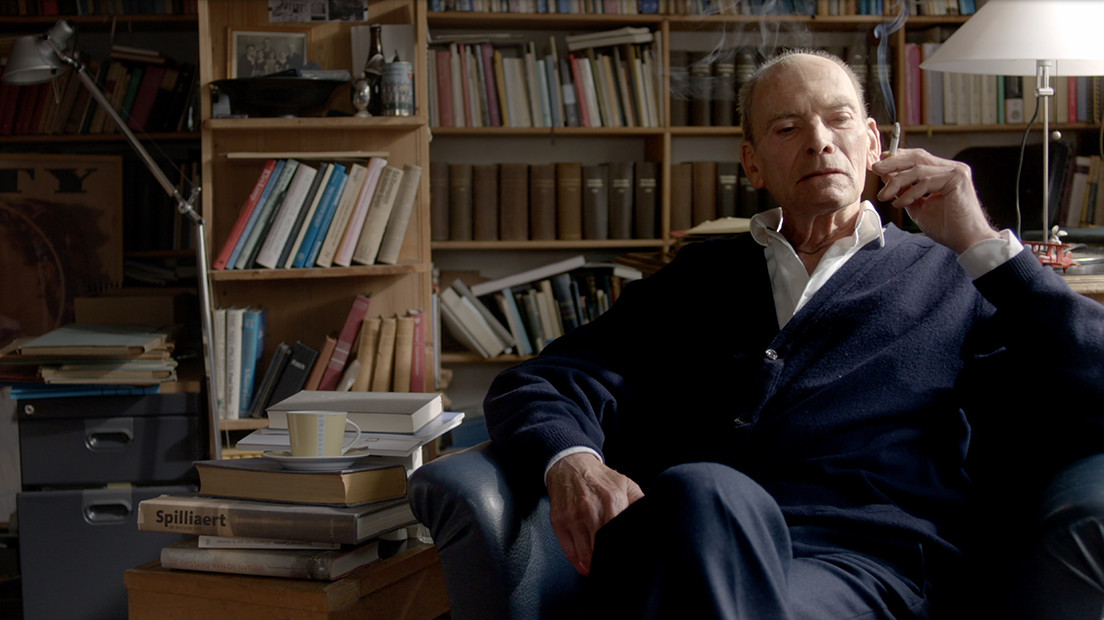 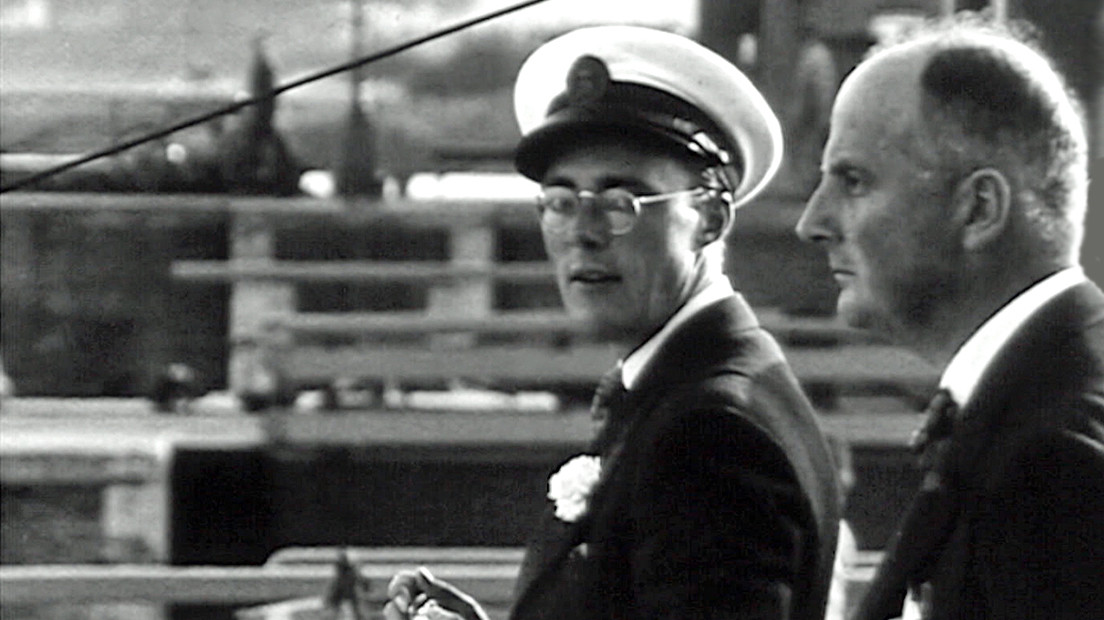 As a miner's daughter, Leonie Brandt (1901-1978) dreamed of becoming an actress. That dream came true when she made her debut in 1925 in the Amsterdam City Theater. In the following years she developed into a versatile actress.

She marries the confectioner Carl Brandt and has two children. Around 1936, she happens to find out that the Victoria Hotel in Amsterdam is full of spies. This triggers all her ambitions and talents. Her life takes a radical turn. She becomes active as a spy for the Dutch intelligence service in Nazi Germany and infiltrates the SD and the highest regions of the Abwehr. She masters the espionage profession down to the last detail. In a rush of lucidity and recklessness, she plays the role of her life. That the stakes in this game are very high, even a matter of life or death, only makes it more interesting for her.

During the war, she was arrested by the SD and deported to Ravensbrück with a death sentence. She manages to survive the nightmare of the concentration camp. After her return, she plays a dubious role in the post-war Dutch intelligence service. She is part of the team that interrogates German war criminals. She knows them all and they are scared to death of her. But a number of prominent Dutchmen also fear Leonie for what she knows about their actions during the occupation. She is said to have explosive information about the so-called Stadtholder Letter from 1942, in which Prince Bernhard proposes to Hitler to become Stadtholder of the Netherlands. Until well after Leonie's death, this has been a recurring media hype. After the death of her husband, she moved with her children in 1952 to a village in South Limburg, near the German border, where she ran a run-down café. She gets hooked on the booze and is admitted to a rehab clinic for some time. She died in 1978.

The film more or less follows the chronology of this astonishing life story in which appearance and reality constantly merge into one another. The narrative framework of the film is a staged interview between the old lawyer Besier and a researcher. After the war, Besier got to know Leonie from close. He recalls that Leonie was present at film screenings in 1947, just after the founding of the film museum. One after the other, the old images she saw evoked memories. And that is what we see: scenes from old films from the Eye Film Museum archive, while we hear Leonie talk about her life off-screen, through the voice of an actress. The various actresses from the film fragments together form the portrait of this hard-to-grasp woman.

Leonie deliberately created a haze of mystery around her. Her life has experienced the most unlikely episodes. How ‘real’ or ‘fictional’ they are is not always clear. The film is about that dividing line. If you want to tell her life, you constantly are confronted with the question: who was Leonie Brandt really? Besier and the researcher speculate about the truthfulness of Leonie's stories and place them in a historical context. In addition, there is the voice of the maker, Annette Apon, who highlights a completely different aspect of Leonie, namely the exceptional way in which she has shaped her life, and the existential freedom that she has created for herself.

The life story of Leonie Brandt fascinates me immensely. I read the biography that Gerard Aalders wrote about her in 2003 and was immediately sold. I felt that her life had a wealth of material for a film. It turned out not to be easy at all however to find the right form for the film.
Leonie writes somewhere that she was an avid film lover. That gave me the idea to recall her life stories through old film fragments.
There are only a few photos of Leonie. The images of the many different actresses from the film fragments together form the image of Leonie. In this way the many sides of her personality take shape, her fluid identity becomes tangible. We also hear her voice, by actress Rifka Lodeizen, tell her story.
The framework in which those old films are presented is a staged conversation between a researcher and lawyer Besier. They speculate about the truthfulness of Leonie's stories and place them in a historical context. The researcher is interested in Besier's memories of Leonie but is also looking for the - unfindable - truth about the ‘Stadtholder Letter’ (Prince Bernhard is said to have written a letter to Hitler in 1942 in which he offered himself as ‘Stadtholder’ of the Netherlands. The origin of the hype surrounding this letter lies in a statement by Leonie).
The majority of the texts spoken in the film are based on historical documents: autobiographical texts by Leonie, witness accounts and official reports, reviews.
There is also my voice over. Unlike the researcher who tries to fathom the historical Leonie, and also Besier who wants to look behind the facade of the Leonie he knew personally, the focus of my fascination for Leonie is on the exceptional way in which she has shaped her life, and the existential freedom that she has created for herself.
Leonie deliberately created a haze of mystery around her. If you want to tell her life, you constantly are confronted with the question: who was Leonie Brandt really? Leonie has written a lot: plays, radio and television plays, autobiographical sketches, and also reports about her work as a spy. At first, I thought the films she had seen early on as a film fan were a source of inspiration used to describe her life in an exciting, cinematic way.
But as I went deeper into her life, the most unlikely scenes and adventures turned out to be based on truth. I came to the astonishing conclusion that she constructed her life as a film. She has used the films to design and direct her life as an exciting film in five acts.
She lived a movie, following the laws of the movie. Not just one event or one period of her life, no her entire life was like a movie. And in the end, I became convinced that the essential motive of her actions was: to achieve a real sense of freedom, by defying conventions, by recklessly confronting the enemy. Life was a game to her. Sometimes she went to extremes to win. Sometimes she could put everything, including herself, in perspective; it was only a game.

The film about Leonie Brandt forms the third part of what has become a trilogy. The earlier parts are portraits of Henriette Roland Holst and Fien de la Mar. All three strong, independent women, who have extracted everything from life with unbridled energy.
Henriette Roland Holst came from a protected, rich bourgeois environment. Becoming a poet was already exceptional, becoming a champion of the socialist movement was truly unique. Fien de la Mar, on the other hand, grew up in a theatre family. That she became an actress was completely in line with expectations. Unique was her immense talent, with which she could hypnotize a room, whether with a song, a tragic role or a comic act. She was a very complex personality, which gave her acting an incomparable intensity. And Leonie, after all, is perhaps the most enigmatic woman in this trilogy.
Just like with Henriette Roland Holst and Fien de la Mar, we have once again been able to draw on Eye's rich film archive. In the three films, the use of the archive material works differently each time. In ‘Dream and deed’ about Henriette Roland Holst I used documentary archive material; there was no moving image of Henriette Roland Holst. In ‘One life is not enough’ about Fien de la Mar, the archive material mainly consisted of feature films in which Fien herself could be seen. In LEONIE: actress and spy, the character Leonie Brandt is portrayed with images of many different actresses. The essential difference with the two previous films is that there is a fluid relationship between the fictional images and the lyrics of Leonie. They not only prove and support what she says, but also function the other way round: the images evoke associations with Leonie.
Finally, a word about the historic Leonie Brandt. The influence of her activities on the course of history will always remain obscure. Not much is recorded in writing in the world of espionage, blackmail and deception are the order of the day, honesty can be fatal. Forming a moral judgment about her seems impossible. 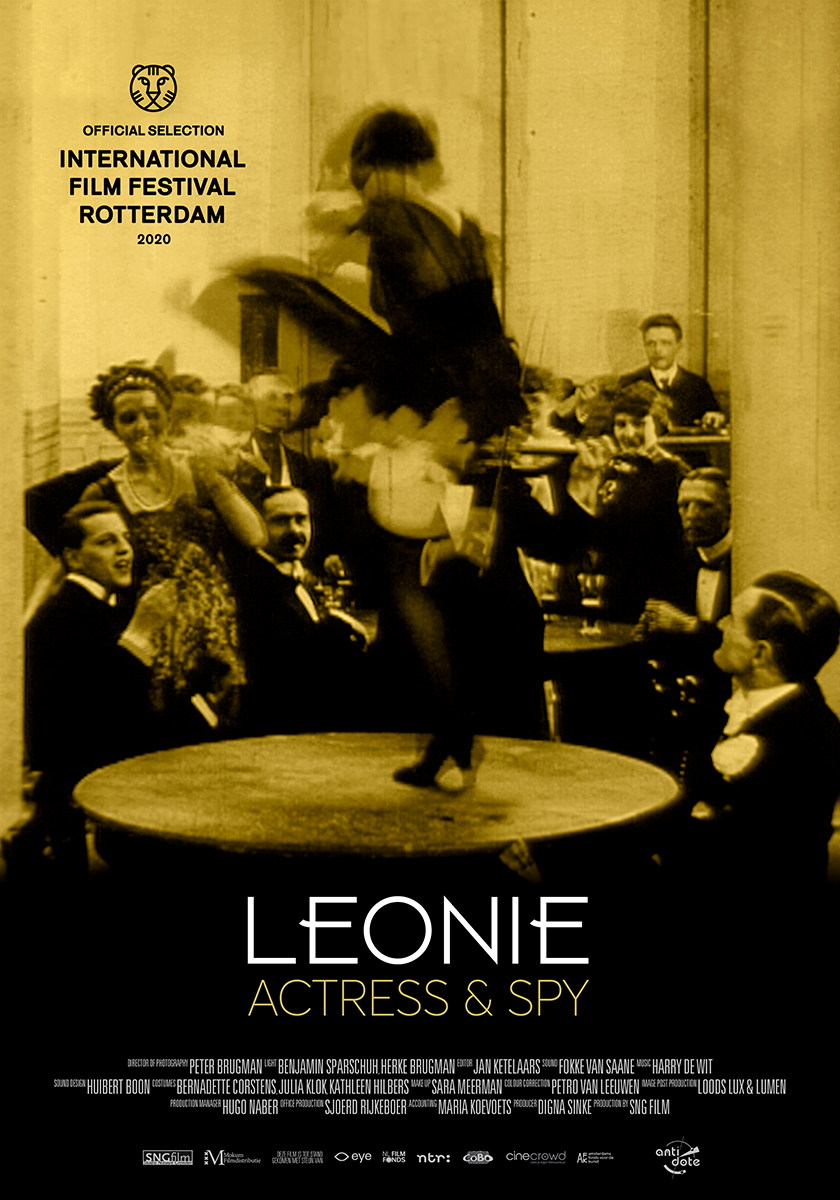